For those who may have missed it..... 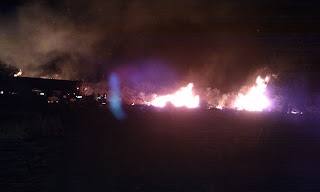 This is a quick little update for those for don't visit the Save Live Export page. Since Thursday Dec 1 Gabyon and surrounding stations have been under seige by bushfire from lightning strikes. All clear was given today, 9th Dec. Our fire area totalled 103 000 hectares burnt, including what Tardie and Yuin station lost. God knows what Meka, Murgoo, Wagga Wagga and others lost. The following is a quick rundown I posted on the SLE page. When I get the chance I'll post the full story. I know I try to keep this blog light hearted but this is some serious shit. I'll get our photos and videos up when I can, but for now, thanks to those who have worried for us and those who have helped us.

A huge big thankyou from Gemma and myself for all the well wishes. The fire started Thursday arvo by lightning. Unfortunately there were also fires on Meka, Murgoo, Paynes Find, and God knows where else, meaning everybody was under resourced, stretched thin with 3 days of howling easterlies. Protecting 30kms of front with 3 units, a grader, a dozer and 2 loaders is not possible. Fire weather warnings for the entire area meant units could not be sent from neighbouring shires until two days ago, by which time some 65000 ha or so had burned.


Unfortunately the aurthorities do not seem to realise the only way to fight fire in that country is with a match. As they became available more people and gear turned up. Tardie would've lost the homestaed if not for everyones good work and back burning. More strikes on Monday saw two new fires, but rain slowed them up. Flared up again on Tuesday with real concerns it would reach the Gabyon homestead., but back burning on the break and some frantic grader and dozer work Wednesday saw it halted. By all accounts it is now dead. People and families who have been in the area all their life have never ever seen fire like it. Our old bloke Dasher is over 50 and never had to fight a fire in his life. Gives you some idea how rare wildfires are out there are.

The groundcrew were brillant. Did everything they could for us and more. Rosco from Yuin took to the air, guided us and saved us. The FESA bloke in the chopper was useless. COuldn't tell east from west with a bloody compass on the dash, nor could he estimate distances. Put the heavy machines in the line of fire once. The controllers, head honchos are far too restricted by requirements for reporting, measurements, assessment. Too many chiefs, not enough indians. And the chiefs couldn't control a fire in an enclosed wood heater. Chinese whispers through the chain of command played havoc. Too scared to make a decision in case it turns into another Margeret River or the fire where the poor truckies got killed. Letters will be written to who ever i can think of explaining the huge downfalls in the way our fire was controlled. While I understand it's only bush, not homes and people, that bush and the animals in it are our livelihoods, somtheing somehat lost on the fella who's solution to preveny it cross the main highway was to burn back from there, some 5 or so kms from the sourthern edge. Only another 25000 ha or so up in smoke. If they had gone with the buring theory on the third day when the breaks were in we could've saved alot of land and stress.

At this stage we havent seen any stock losses from the air. The fire was effectively a grass fire, which we couldn't access due to the shrubbery, mainly. From the air there are tracts of un burnt country thoughout the burnt zone, so we are hoping most would've got away. On the plus side we now have some of the widest, smoothest windmill tracks in the district. The roo shooters will be pleased. The downside is we all fear this is only the begining, alot of lightning between now and winter. With any luck we'll get some summer rain to freshen things up.

Thanks again for the well wishes. I'll get some photos and video up soon. We're receiving sheep into the depot tomorrow. No rest for the wicked.
Posted by Michael at 12/09/2011 04:05:00 pm

Hope the Summer rains do head your way. Shame hay season is finished for you, what would be more likely to bring the rain?!

Have been thinking of you all, and hope this causes some policy to change for the better in terms of how fire is managed in rural areas.

I appreciate it, it really very dangerous.