There's alot of arguing going on in Parliament lately. To-ing and fro-ing, argy bargy and general oushi kuso being thrown about. I've been in the tractor the last few days and have had the wireless on, the one I've welded the dial to ABC so Gemma can't get in and stuff about with my stations, so I've had the opportunity to hear a fair bit about this offshore processing business. And the hypocrisy of it all stuns me.

It all centres around the Governments Bill designed to ensure the High Court can't scuttle their plans to send asylum seekers / refugees / illegal immigrants (cover all bases so as not to upset anyone) to Malaysia for processing. The following comments are from the report I heard based on the exchange in Parliament. The whole thing is here.

Dead right. Foreign relations are such a complex thing. People, powerful people, can take offence at such tiny things. Such things must be considered when dealing with other countries, especially those that are important trading partners with Australia.

In one of my earlier posts, I mentioned we fell into depoting sheep for exporters. Purely by accident, we went from contract fattening a thousand or so store pastoral sheep, to holding up to twenty thousand head at at a time for quarantine and inspection by AQIS. This wasn't a steep learning curve, it was a vertical cliff face, but one we have manged to scale, and scale successfully. Five years on and we have done about 350 000 sheep, and still managed to get engaged, elope and get married. For those of you who end up phoning marriage councillors after drafting 200 wethers, all I can suggest is that standing at the draft gate expecting the sheep to run towards you as you scream advice to your helpers (wife) is never going to win you brownie points.
Read more »
Posted by Michael at 9/17/2011 07:30:00 pm 2 comments: #101. Just when you think you're done, something else comes up.

#102. When your wife is crouched down next to you holding while you are welding, try to hold in your farts.

#103. The worse the bra, the rougher the paddock. Offers of help aren't appreciated. Neither is accelerating.

#104. Try to transfer the data to your office records before you lose the little red (or green) notebook in your pocket.

#105. Machinery field days are like strip clubs. You spend all day staring at something you can't afford and wouldn't know what to do with anyways.

This is a quick plug for a project a friend of mine is working on. It's called Grazebook.com, basically a forum for graziers or anyone else to share their knowledge. It is well setup with each topic in it's own section, and has the potential to be a great resource. It's free to register and fairly simple to use. You can make your profile as private or as public as you like. By registering you can see private forums that non-registered people can't. They are still in the construction and testing phase at the moment, but would appreciate people jumping in and having a go, to help iron out any bugs before they go live in a few months. 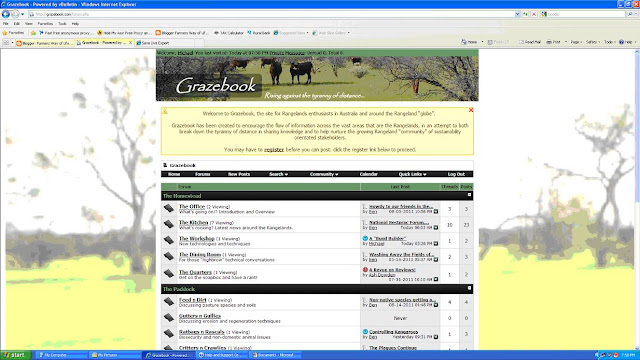 Email ThisBlogThis!Share to TwitterShare to FacebookShare to Pinterest
Labels: Agvocacy

Thanks must go to the good people on the Save Live Export Facebook page, who appear to have the same warped sense of humour I do, for their help with this last (for now) twenty five.

#76. The further you throw a tool in anger the harder it is to find. And when you do find it it will be broken.

#77. Never, ever curse the rain. Mother Nature has good ears and she is a vindictive bitch.

#78. When picking rocks in the freshly seeded hay paddock, do not worry if you miss any. The hay mower will find every one for you in the spring.

#79. The one time you forget to lock up the chickens at night is the one time the sheepdog breaks his chain at night.

#80. Bush flies head up your nose only when your hands are covered in grease or afterbirth.

A friend of mine posted an article from a metropolitian newspaper about the discovery of Geep.

What the hell is a geep you ask? The answer you get will depend on who you ask. If you ask the good people in the article they will tell you it's a cross between a goat and a sheep. If you ask me I will tell you it's closely related to dropbears, yowies and honest politicians. How would I know? We run about 15000 of them on our properties, and by "them" I mean the supposed geeps. If it looks like a geep, talks like a geep, walks like a geep, then it's a damara. Or maybe a dorper damara cross. Or dorper merino cross. It gets blurry at times, but it's not a goat crossed with a sheep.

The damara breed originates from East Asia and Egypt circa 3000BC. They are a natural breed, meaning nature has done the selection, not humans. The first genetics were imported into Australia in 1996 from South Africa, a time when the wool industry continued to struggle. At first glance they do look similiar to goats. They have hair like a dog and some have bells like a goat on their throats. They are long rangey bodied animals, with a very strong herding instinct. Their defining feature though is their fat tail. They use their tail similiar to a camels hump, storing fat there which is then drawn upon during hard times.

In August 2009 the then owner of Gabyon Station rang us up. At this stage we were still busy convincing the banks buying the place was a good idea. "You've got to come up and have a look around the joint,"he said. "Even if you don't end up buying it, we'll never see it this good again." They had just had their first real winter in years, and the place was going off, in fact the background photo of this blog comes from then, as does the side photo of the flowers near the yards.

Rob may have jumped the gun a little with his last statement. After a decent winter in 2009, and a reasonable one in 2010, it seems the heavens finally remembered what it supposed to do, and that it liked doing it. Rain. Glorious rain. It started raining in December 2010 and doesn't seemed to have stopped since. And the best thing is, everyone looks to have got something.

Email ThisBlogThis!Share to TwitterShare to FacebookShare to Pinterest
Labels: wildflowers

Sometimes even no clouds has a silver lining. Part 2.

2007. A new year. A much anticipated new year. Forget 2006, that's one we will wipe from our memories. Learn what we can from it and move on. This year is our year. We'll pick up where we let off in 2005. Our new feedlot is going gangbusters with the shippers, now all we need is a reasonable season and we'll make some ground back. As some bright spark once told me, it always rains after a drought. What that wonderful piece of wisdom forgets to mention is that it always blows before a rain.
There is a reason the trees grows sideways here. The same reason a fifty something turbine windfarm is built right next to our place. Also the same reason pilots landing in Geraldton call it running the gauntlet. What some might call a gale we call a sea breeze. From about November to April the wind blows. And blows. Easterlies in the morning and South Westers in the evening. It can be relentless.
And after 2006 the last thing we needed was a record breaking day of wind. But blow it did. A cyclone was coming down and it was going to be a beauty. Bring it on we said. As I watched everything blow away I consoled myself with the fact at least it was going to rain. Yup, bring on the rain...... anytime now, my neighbour is getting my paddocks. Where's the bloody rain? Two days later the wind stopped and we were left with two farms that can only be described as the Sahara. And not a drop of water had hit the ground.
Read more »
Posted by Michael at 9/01/2011 06:29:00 pm 3 comments: