#151. Always remember to put the draw bar pin in after backing up to whatever you are planning to tow.

#153. Your new Smartphone and it's 12 volt car charger do not appreciate your trucks 24 volt cigarette socket.

#154. The dog that yaps all night stays silent in the yards.

#155. Never confuse your Iphone with your electric fence tester.

On Saturday just gone I headed back out to Gabyon with a big delivery of troughs and water fittings. I had just got back Friday morning from being called out there Thursday for another fire. Luckily the rain killed it before I got there. It did flare up again Friday but another drenching saw it finished.

Trouble with stations is they are so bloody big. As I arrived to the house Helen came out and told us she'd just been called to say a new fire had started on our eastern boundary. Obviously the rain never reached that far. So Mike and Gemma took off while mysef and her brother Matt got the new fire unit I brought up on Thursday ready.

As we were heading out to the fire we could see the patchy showers coming over. The unknown was whether it would rain over the fire or not.


The country out there was a bit more open, meaning we could get in and too it without waiting for the loaders and graders, which were on their way, plus the grass wasn't as high. This fire was very tame compared to Thursdays and our first one. So it was a good chance to get some video of us in action. I'm driving, and my brother-in-law Matt is on the back. The last 3 minutes or so of the video shows the best way to put a fire out. We just need to work out how to make it happen more often. And not get bogged.

Disclaimer: I've tried to remember this as best I can. It all got a bit blurry by the end. Oh, and there may be some course language. Actually, I can guarantee there will be. 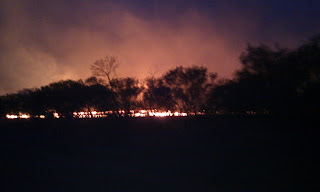 While I would be happy if I never fight or see another fire in my life, I will admit to finding a slight thrill in them. Something to do with the sudden rush when you first see the smoke, the panicky hurling everything off the ute as you load up the unit and scream out towards the smoke, wondering whose it is, where it is and what's going to happen, hoping it's only grass and not near a shed or house. The frantic chasing down of the front, the heavy machinery madly trying to cut the blaze off, the way everyone drops everything to come help. It can be a rush. And judging by the way others seem to get what I call "fire crazy", I'm not the only one. Utes which you weren't allowed in without wiping your boots first become scrub bashing, fire chasing water carts from hell, with the normally fastidious owner tearing around with their windows down, sucking plumes of smoke, dust and ash into their once pristine interior.

Turns out the thrill soon wears off when it's your place though.

On the 1st December 2011, after the best season the rangelands had seen for God knows how long, lightning struck Gabyon Station. It also struck Meka Station, Murgoo and Melangata, as well as down near Paynes Find. Now normally, this isn't a problem. Being new to the area, we have been told fires just burn themselves out. Might burn a thousand acres or so. When the paddocks range from 3000 to 20 000 acres, so what? Quite often you won't even know there's been a fire out there until you come across a burnt patch mustering.

Not this time. The fire burned for nine days and by the time the all clear was given it had covered 103 000 hectares and we've been told cost FESA damn near a million dollars.