A few months ago the Western Division of the Damara Sheep Breeders Society of Australian contacted us to see if we were interested in displaying at the Mingenew Expo if they footed the bill. No worries we said. We'd actually toyed with the idea last year, so it seemed like a good opportunity to try and get a bit more info about the breed out into the wider public. There's a lot of misunderstanding about damaras. They're notorious fencers. You can't handle them. They mate with goats and produce geep. They'll ruin the wool industry. Rubbish. They aren't any worse than crossbreeds on fences, we handle them all the time, I'm not even going to start on the geep thing, and the wool industry was well on the way to ruin before the humble damara got involved. In fact, wool's demise is what got the damara here in the first place.

A week before Mingenew Expo was the Chapman Valley Show. Gemma was going to ride in the cattle cutting and I thought I would enter into the sheep counting competition. I was slightly nervous for both of us. It was Gemma's first cutting meeting and I had visions of her horse falling out from under her. I needn't have worried. After standing around all day waiting in the sun we tend to get a bit sleepy and Indra (the horse) is no different. His reaction times weren't exactly lightning fast. But not bad for a beginner, both of them. I was slightly nervous entering the counting competition, as I had visions of all the farmers who have delivered to our depot and added an extra two, three or thirty five sheep onto their waybills (just to be sure), see me miscount the first heat, confirming their suspiscions that I am a thieving bastard who can't count. Fortunately I won the Mens and came second in the Open, after a hotly contested count off. I was hoping to get a Certificate or something I could wave in the face of the next guy who accuses me of miscounting his sheep, but the envelope with nice writing holding the fifty dollar cash prize will have to do.

The Chapman Valley show also has sheep displays. A friend of ours was taking her damaras along, so we went to the pavilion for a look. Merino rams, Dorper rams, some Dohnes, a few pens of crossbred lambs, but no sign of any damaras. Until we went around the corner and there they were. Outside the shed, off on their own next to the toilets. Figures. She even had to bring her own panels. Which was probably for the better, as her damaras were huge and could've stepped over the knee high rails they use in the pavilion to contain the mollycoddled stud stuff. It was slightly amusing she had been put outside, we could only guess fibre contamination was the concern. Of course, that concern also completely ignored the fact that the dorpers in the pavilion also shed dark and medullated fibres. These fibres do not take the dye in the wool mills, which is why contamination between the breeds becomes an issue. We had a laugh and arranged to borrow her panels for the Mingenew show.

Fast forward a few days and we were all packed up to head to Mingenew Wednesday afternoon. We had run in the mob of rams and I pulled out the rams Gemma pointed too while she held the gate. We has some nice big pure damaras, some bloody huge dampers, and some young  damara flock ewes that we had brought down from Gabyon earlier. We loaded the rams into the horse float, the ewes onto the ute, chucked the panels on top and away we went. An hour later we pulled up at the grounds and found our site. Then checked the map to make sure we weren't mistaken. Nope. They'd put us in the Stud Breeders Pavilion on the downwind side. This could get interesting. 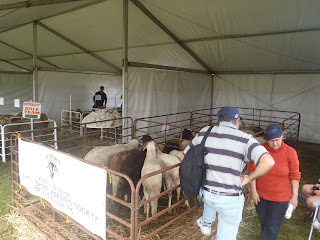 As we started setting up the panels, the Dorper people, who were clever enough to book an open spot a couple of sites away, were doing the same. One of their rams decided he wasn't going into his pen, he much prefered the open expanses of the race track. Fortunately their rams are fairly quiet, and we all managed to corral him back into his pen. This, however, put the wind up us. Our sheep are not tame. They haven't done this before and we had premonitoins of dropping the horsefloat tailgate and watching the rams leapfrog the panels and escape into the yonder. It was at this point I asked Gemma if she remembered to pack the rifle, just in case. She hadn't. Very carefully, very quietly we lowered the ramp, closed our eyes and hoped for the best. It's a theory I use regulary and it worked today. All the sheep were contained, for now anyways.

While this was going on, our neighbours started setting up their display. They'd obviously done this before. Nice shiny white knee high panels, a truck, swags, loading race, all very organised. What I'm guessing they don't usually have is the slightly bemused look on their face as they see who their new neighbours are. We didn't hang around long though. A few polite hello's, seeya tomorrows, and we bolted, hoping like hell our sheep don't follow our example either.

Next morning we arrived, again forgetting the dog and the rifle, and snuck around the corner to see what the damage was. All sheep were present and correct, so we set about organising the display with some photos and brochures and the big banner proudly displaying the Associations credentials. At the same time, the neighbours were doing the same, putting their rams into little show pens and pinning up their papers. Then came the Pièce de résistance, their show fleece. Oh crap. Right on a table next to our pens on the downwind side. You know the careful measures I mentioned to prevent contamination? That's not one of them.

The gates opened and people started meandering through. We got a lot of interest, and were pleasantly surprised by the positive feedback we recieved. Some people hadn't seen them before, some had and knew what they were, others had and thought they were goats. Our pavilion neighbour even came over to have a look, curious why we made the switch. We explained it was horses for courses, and how we felt our particular course didn't suit his type of sheep, and how his course, down south in the cold and wet, wouldn't suit our type of sheep.

The second day proved funny. The merino guys site next to us had become a bit muddy and stinky overnight, and they decided to move into the spare site next to them. It was a good idea, but it gave the impression they'd given us the snub, something not missed by many who walked past. Another breeder also had an on site sale. I have never seen so many Elders reps in one spot. It was like a congregation of pink and grey galahs, all squawk and flapping about rying to attract a bid. The sale went well though by all accounts, a good sign for the sheep industry here in WA. It makes a nice change.

The show draws to a close and everybody starts packing up. Given the troubles we had getting our boys onto the horsefloat the first time, again we were a little nervous. Ye of little faith. Two days of strangers walking past and gawking had them quiet as lambs. Well, quiet as lambs souped up on Red Bull and Mars Bars, but quieter than usual. They flew into the float and we slammed the door shut before they realised their mistake. Next year we'll do it again. But we'll bring some cute little lambs to sell to unsuspecting suckers who think they are geep. I wonder if Elders are interested in running a geep sale?
Posted by Michael at 10/05/2011 08:03:00 pm

Hey just thought that i would let you know im one of those southern farmers who made the 8 hour trip to show merinos at mingenew field days this year, but only my second field day (newdegate a week earlier being my first!).

Good to see i wasnt the only one learning by trial and error.

Our breeding is a bit different to some of the traditional merinos and we couldnt even get a spot in the merino tent at newdegate, so good to see it a bit more open up there.


It was interesting seeing what your doing, at the show, with everything having a place in the multitude of different farming systems we have.

Sam, great to hear from you, glad you enjoyed my take on it all. Hope the flies aren't giving you too much trouble down there. Helluva year for them.