Hay is a finicky business, one I am still learning. The first year I baled it somehow turned to silage. Sickly sweet strong smelling stuff that the sheep just loved. I have no idea how or why it didn't go mouldy in the bale, but I'm not keen to try that again. The second year was better, and last year the season finished so quick and so hot the hay was as dry as a chip.

This year we had it all figured out. One farm would grow hay to take up to the station. A contractor can bale it into little round rolls so it's easy to cart and easy to handle out there. I'll mow it for them and they can do the rest. Simple. The home farm, where the feedlot is, I'll be able to do all that with our machine. Our machine makes a five foot wide bale and is only twine wrapped. Being five foot makes it hard to cart down the road as the bales hang over the side of the truck, but it is ideal for us, as we get more hay in a bale, making feeding out in the feedlot quicker. And seeing as we only cart them from the paddock to the feedlot, being oversize doesn't matter. Provided the truckie remembers to swing wide around the gate posts. The crops were phenominal. We made plans to fill every shed we have with enough hay for the next two years if we need it.

Mowing time came and away I went, knocking over the paddock down the road for the contractor. The mower is a scary bit of gear. Ten discs spinng at 200 plus miles per hour (according to the manual) that fling the hay through two huge rubber rollers which condition the hay so it dries faster. The guy we bought if off said "You'll never choke this thing." He was right. The tractor stalls before the machine blocks. (WARNING - GORY BIT TO FOLLOW!!) Even the poor old kangaroo who must've been sleeping in the crop didn't even make a noise as he went though. The only reason I knew was on the next lap I wondered what the red thing in the windrow was. Thinking it was something that had fallen off the mower (which is red) I stopped and had a look. All the remained was a red smear about thirty metres long. The only reason I knew it was a roo was a the one little paw I found. Yuck. Least he wouldn't have felt a thing. I finished that paddock and the next day it promptly got 10 millimetres of rain on it. A day later I knocked down one hundred acres at home for me to do. Anymore than that at a time and I can't bale it quick enough. The weather wasn't helping the curing process at all though. Overcast days and damp dewy mornings. Not ideal. After inspecting the hay with the contractor  twelve days later we decided she was still a bit green and would leave to Monday. Some light showers were forecast for Sunday evening, but there was no point baling hay not ready, as we wanted to fill every shed we had out at the station with it.

Somebody wrote somewhere cutting hay has drought breaking properties. So does shearing. The shed was full and sheep in the yards for an export job awaiting the shearers. And whatever the third thing is, we must've had the trifecta. About 3 am Monday morning a strange sound awoke me. A loud noise. Rain. And not just a gentle drizzle, this sounded torrential. It must've rained all night and I heard every bloody drop, washing away all my expectations of a ripper hay crop. To top it off, we had 2500 sheep to blood test for Malaysia and the yards were a mess. That must've been the third thing. And then on Tuesday morning, it rained directly on us and by the looks of the radar, bugger all elsewhere. By Wednesday we'd finished the blood testing and I madly went mowing the other paddocks that were starting to turn. By then, the previously mown stuff had dried on top enough to turn, so I bolted the new rake together and flung hay about for the next day and a half. Soon as the last of the hay was turned, I hooked onto the baler and started pumping out bales. Unfortunately, the contractors own hay had copped a drenching too, and he was flat out baling his stuff, meaning I had to try and bale both farms before it all turned to mulch.

The thing with machinery is they never break when you aren't using them. Despite doing a test run of about 25 bales on some mown pasture two weeks beforehand in an attempt to iron out any bugs, four laps in and a bearing went on Saturday afternoon. Typical. Luckily I managed to get hold of the dealers serviceman who could find a bearing and came out at 5 o'çlock Saturday afternoon to fix it with me. The Walkaway pub is between the two farms, so I thought I'd better get him a carton for his troubles too. Bloody farmers, expecting everyone to drop their weekends for them, so a little goodwill goes a long way.

Not far enough apparently. When the second bearing went Sunday lunchtime he nevered answered his phone or called me back.  Can't say I blame him. Though the parts man did answer and I sent Gemma into town to pick up the replacement bearing. By this time, I was supposed to have finished the paddock and have the tractor back home to feed the sheep before starting the next paddock, but the breakdowns had thrown my timetable out the window. Hay can wait, sheep can't, so I headed back Sunday evening leaving a third of the paddock on the ground. Monday morning was a damp dewy start, so I got the serviceman back out and we went though the baler checking every bearing on the machine. Two more had a rattle up, so I ordered enough to redo every single one on the machine should I need too. It was Tuesday before the parts arrived and I got it bolted back together. Again, the rain clouds were looming, so aways I went, foot to the floor.

Things usually break when you start trying to hurry. One big clod of hay jammed in a roller and pinged off a drive chain Tuesday evening. Seriously, it's not funny anymore. And to add insult to injury the chain was the only size joiner link I didn't have in the workshop. It was only a five minute fix, but it was the waiting until the following morning to get to town and get the right size that gave me the irrits. Needless to say, I came home with a bunch of joiners, just in case. And not only that, Wednesday morning was the first morning without a dew on the ground. Unbelievable. I could've been baling staright away. 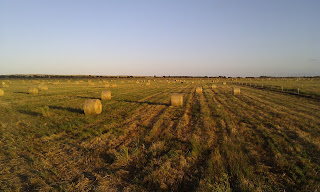 Reinforcements arrived in the way of a phonecall. The contractors had finished what they could of theirs and were making a beeline for us. Once we got going we made some ground. By the end of the day everything that needed to be baled was baled, which was a great relief. In a few days time the second lot will be ready to bale. In the meantime I've got some bearings to replace.
Posted by Michael at 10/16/2011 08:58:00 pm

Feral pigs have the ability to jam a mower/conditioner. And no amount of happy thoughts while switching to ground drive and reversing will help. It's a case of a long rope, arms in the mess and towing it out. Yuck!

argh frustrating :( feel free to send the rain our way. With fires burning on many fronts it is much needed.

Leigh, you have given me one more reason to be grateful we don't have pigs. I can only imagine.